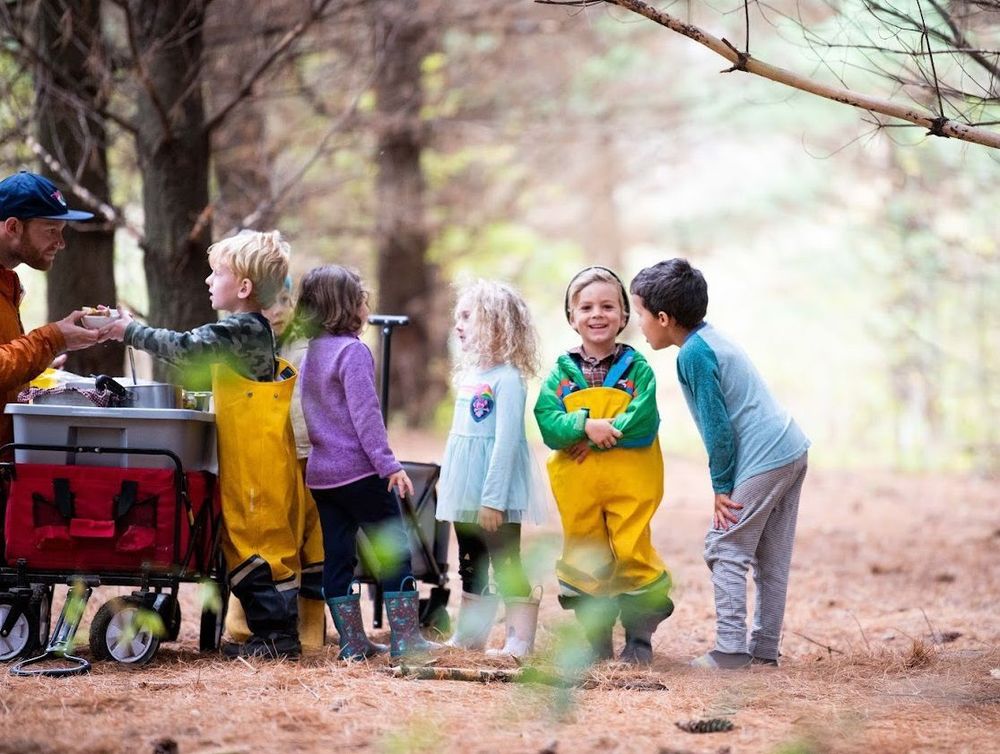 The Kickapoo Valley Forest School, a collaborative venture between the La Farge School District and the Kickapoo Valley Reserve, was featured recently on both National Public Radio and it’s in-state counterpart, Wisconsin Public Radio.  The public charter school has drawn acclaim for its focus on engaging young learners in a student-focused, inquiry-based education that utilizes the outdoors as a dynamic and engaging fulltime classroom. “Research shows that children’s mental health and academic performance can be improved with increased exposure to nature and less time on electronics.  Anything children stumble upon in nature can be a springboard to learning,” noted KVR Education Director Jonel Kiesau.  “When children are led by their curiosity and immersed in their learning environment, concepts that form the backbone of academic learning truly stick.”  Kiesau adds that the lead instructors, Julia Buckingham and Ximena Puig, are incredibly skilled at weaving nature and academics together.  “A dead frog can spark a discussion about the cycle of life, perfectly formed snowflakes falling on the childrens’ mittens become a lesson about the water cycle, and collected walnuts can start a discussion about how animals survive in winter and then be cooked over an open fire to create dye that the children use in their art projects.”

The public radio stories relate how outdoor classroom spaces are becoming more common across the nation.  While interest increased in part due to Covid restrictions and the elevated health risks associated with being indoors, the documented social and educational benefits children derive from nature-based educational models is the primary driver behind the surge.  Robin Hosemann, KVFS Assistant Planning and Leadership Coordinator has observed these benefits already among students in the forest school, which opened in September.  “We conducted a survey of parents and every single respondent stated that, so far, their child’s school experience has exceeded their expectations.  Specifically, they noted observing a broad range of benefits in their kiddos, from increased physical stamina and coordination to improved interpersonal skills and behavior to notable gains in math and language skills.”

The school has attracted families from both within and outside of the La Farge School District, and beyond the benefits for students is emerging a positive impact on the broader La Farge and Kickapoo Valley communities.  “The school is a natural partnership between the Kickapoo Valley Reserve and the La Farge School District,” noted La Farge District Administrator Meaghan Gustafson.  “The KVR was the outcome of a lengthy and arduous failed lake and dam project which ultimately left our district with lower enrollment and a smaller tax base.  By hosting the forest school, the KVR is helping to bring innovation and enrollment back full circle to the La Farge School District while simultaneously meeting the mission of the KVR through educating future stewards of our natural resources.”